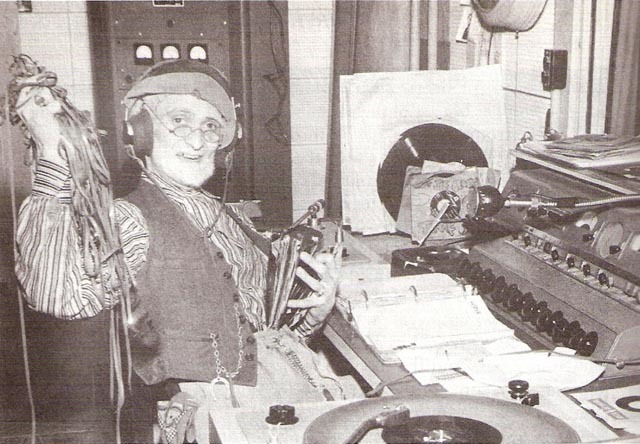 Manuel Dewey Clark JR was born on August 6,1922 in Erwin Tennessee. It was in his teens that he became interest in entertaining and would teach himself to play several stringed instruments including the banjo. He got his first taste of the business when he won a banjo-picking contest at age of 13. He would spend the next 12 years learning his craft as a tap dancing, guitar strumming, mountain balladeer playing the schools and theaters in and around East Tennessee. He played with several groups through those years including, the Prairie Cowboys, The Moonlight Drifters and The Lonesome Pine Boys. Back then was known as “Speedy” Clark a name given him by one of his schoolteachers. While he was with the Prairie Cowboys they tried their hand at hosting their own radio show from an old chicken house in Erwin but were soon shutdown by the FCC.

From 1941 to 1945 he put his career on hold and served as a drill sergeant and MP in the United States Army during WWII. After being released from military duty he made is way up to Renfro Valley where he was hired for a tent show. Mr. John Lair, Renfro Valley’s founder, recognized his potential as a full-time comic and helped him develop an old man character he called “Uncle Joe Clark.” Soon, he adopted the label of “Old Joe Clark,” after a popular fiddle song of the day. He really never wanted to become a comedian preferring to be a radio announcer but “Old Joe” Clark was such a big hit with the audiences at Renfro Valley he decide to stay with the character that he had modeled after traits and sayings of his own family members.

In 1950 Mr. Clark took a few years off from Renfro Valley and went down to Nashville Tennessee were heplayed the Grand Old Opry and toured with several acts including Bill Monroe and the Bluegrass Boys. He also landed roles in several movies including, Second Fiddle to a Steel Guitar, Country Music on Broadway, and Marshall of Windy Hollow.

In 1952 he went back to Renfro Valley and once again became a big hit with the Renfro Valley audiences. When the Valley launched it’s own radio station WRVK he was given his own show, something that he had always wanted to do. He soon became a station favorite and would continue to host shows and voice overcommercials at WRVK over the next 18 years.

In the sixties “Old Joe’s” youngest son Terry Clark began performing with him at Renfro Valley and would continue to do so there and at festivals all over the Eastern United States for the next 29 years. Every year the Clark Family would co-host the annual “Old Joe” Clark Bluegrass Festival in Renfro Valley, a multi- day event celebrating bluegrass music and featuring some of its most talented artists.

Throughout the years he would continue doing shows at the Valley but occasionally would take time off to travel and play other venues. He would credit his success with the ability to be able to fill several shoes in the business including emceeing, singing, playing and telling jokes, but it was “Old Joe” that captured the hearts of his fans.

On Feb. 20 1998 Mr. Clark passed away at the age of 75 in Richmond Kentucky. He had spent his whole life entertaining generations of fans as a singer, musician and comedian. He will forever be fondly remembered as the character he played for more then 50 years at Renfro Valley “Old Joe Clark”. His antics and country humor served to bring happiness not only to his fellow entertainers, but also to everyone who crossed his path. Country music star “Little” Jimmy Dickens called him “about as funny as I have ever seen". He has brightened lives and put smiles on thousands of faces with his music and laughter. A bronze statue now stands at the entertainment complex in honor of his contributions to Renfro Valley and to the music industry.