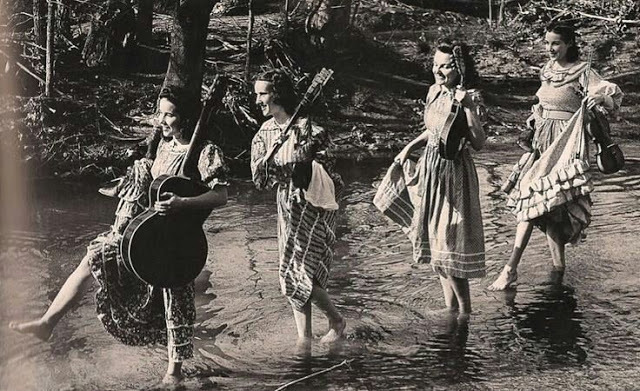 In 1917, Lily May Ledford was born in the Red River Gorge area of Powell County, Kentucky. Growing up in a musical family, she was much influenced by her father, Daw White Ledford, who was an excellent musician. At a young age, Lily May began mastering the fiddle, banjo, guitar, and bass, while performing locally with her siblings. After winning a contest in 1935, Lily May caught the attention of John Lair, a talent manager for Chicago radio station, WLS. Lily May took a job as a staff musician for WLS and soon began learning from such entertainers as Red Foley and Patsy Montana. It was John Lair, however, who took Lily May under his wing, and signed her to a five year contract.

Lily May’s older sister, Rosie, soon joined her at the station. Lair shared with the girls his vision to start a barn dance, back home in Kentucky. One of its features would be an all girl band, with Lily May Ledford as a vital part. In 1937, Lair moved the entire broadcast to Ohio and the Renfro Valley Barn dance was born, as was the world’s first all girl string band, “The Coon Creek Girls” featuring Lily May Ledford, her sister Rosie, Esther Koehler, and Evelyn Lange. In keeping with the flower theme, Esther changed her name to “Violet,” and Evelyn became “Daisy.” Though the girls could each play a variety of instruments, Lair encouraged Lily May Ledford to play the banjo, where she utilized her unique tuning and claw-hammered style of playing. The Coon Creek Girls would also feature Rosie on guitar, Violet on mandolin, and Daisy on bass. The Coon Creek Girls were an instant success. Their energetic stage performance and fast paced repertoire won over audiences, and remained true to their Appalachian heritage. Lair kept the girls performing in Ohio, while he was completing construction on the Renfro Valley site in Kentucky. The Coon Creek Girls played many radio and live shows. In 1938, the Coon Creek Girls recorded for the Vocalion label in Chicago. They recorded songs like “Pretty Polly”and “Little Birdie.” The highlight of their career was in 1939 when they performed at the White House for President and First Lady, Franklin and Eleanor Roosevelt and King George IV and Queen Elizabeth of England. Later that same year, just as the Renfro Valley facility in Kentucky was completed, Evelyn and Violet decided to leave the band, and were replaced by Lily May and Rosie’s younger sister, Minnie who became known as “Black Eyed Susan.” The Coon Creek Girls continued to play the Renfro Valley BarnDance for many years. Their intense, foot-stomping approach to ballads and religious songs continues to inspire and entertain audiences and musicians, alike. Their love for traditional Kentucky Mountain Music lives on in their music, and in our hearts.