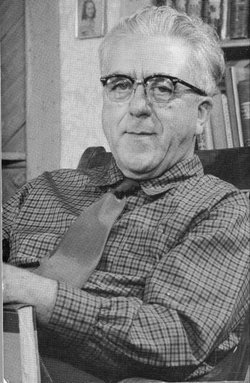 Radio Pioneer, Folklorist, Writer, Entrepreneur and Founder Renfro Valley Barn Dance. John Lair was instrumental in discovering and developing the talents of many country music performers such as Lulubelle, Karl & Harty, “Red” Foley, Doc Hopkins, Linda Parker, “Whitney” Ford, Lily Mae & the Coon Creek Girls, Merle Travis, Homer & Jethro, “Slim” Miller, and Old Joe Clark, among others. His Cumberland Ridge Runners (the first string-band on radio to feature Kentucky mountain music) were a mainstay on the WLS National Barn Dance in the 1930’s. Seeking to establish a base closer to home for the radio shows he was producing, Lair and many of his entertainers moved to station WLW in Cincinnati, Ohio. He felt that radio needed a little more realism, a little less showmanship, and a lot more heart-felt sincerity. So there, at the Cincinnati Music Hall, the Renfro Valley Barn Dance was born in 1937. In just two years, with the help of “Red” Foley and his brother, Cotton, and “Whitney” Ford, preparations were completed for moving the entire show to its intended destination, Renfro Valley Kentucky. On opening night, November 4, 1939 when John Lee Lair stepped to the microphone on the stage of the big barn and said: “This is the Renfro Valley Barn Dance, coming to you direct from a real barn in Renfro Valley, Kentucky-the first and only barn dance on the air presented by the actual residents of an actual community…” A Kentucky tradition was born; a tradition that lives on today in Renfro Valley.