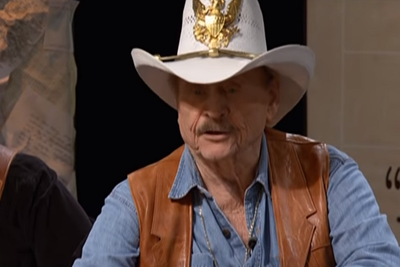 On May, 1931, Jerry Chesnut was born in the town of Loyall, in the mountains of Harlan County, Kentucky. While growing up in the coal mining camps, Jerry spent much of his time playing his guitar and listening to the Grand Ole Opry, and the Mid Day Merry Go Round, a country radio show, broadcast out of Knoxville. After enlisting in the Air Force, Jerry served in the Far East, during the Korean War. Upon his discharge, he moved to Florida where he became a railway conductor, while also performing for local radio stations.

In 1958, he moved to Nashville in pursuit of a career in music. Nine years later, Del Reeves released Jerry’s first hit song, “A Dime at A Time.” In 1968 Jerry had his first song to go to #1 with Jerry Lee Lewis’ recording of “Another Place Another Time.” Artists and producers alike were so impressed by Jerry’s fresh approach to songwriting, that many attended his demo sessions, hoping to get the first shot at his new material. In 1970, Jerry signed a record deal with United Artist, but later resigned when his desire to be a songwriter overcame his desire to be an artist. After much encouragement from Roy Clark and others, Jerry became a regular on the Hee Haw Show, for several years. As with the record deal with United Artists, Jerry would find that the Hee Haw appearances also took valued time away from his songwriting. He left the program, purchased a building on music row, and began pitching his songs to artists and producers. The years that followed found Jerry licensing the release of more than 50 recordings per year. That’s an average of one per week!

One week in particular found 5 of his songs in the Billboard national chart, and 3 in their Top Ten. Among his most famous songs are: George Jones’ “Good Year for the Roses,” Tammy Wynette’s“The Wonders You Perform,” Loretta Lynn’s They Don’t Make ‘Em Like My Daddy Anymore,” and “ONEY” recorded by Johnny Cash. In 1972, Jerry was named the Songwriter of the Year and in 1973, was honored with International Writer of the year. In 1975, Elvis recorded Jerry’s “Trouble,” which would later be re-recorded by Travis Tritt. Incidentally, Elvis considered Jerry his favorite songwriter and recorded 12 of his songs, including, Pricilla’s all time favorite, and “It’s Midnight.” Jerry Chesnut has received dozens of BMI Awards, 2 from ASCAP, 2 Grammy Nominations and 1 Tony, numerous Gold Records, and several Platinum ones. In 1996, he was inducted into the Nashville Songwriters Foundation Hall of Fame, and in 1999, he was inducted into the International Songwriters Association Hall of Fame. Jerry Chesnut has befriended and worked with just about everyone music industry, both here in the United States and throughout the world. He has become one of the most versatile, popular, and productive songwriters in our time.