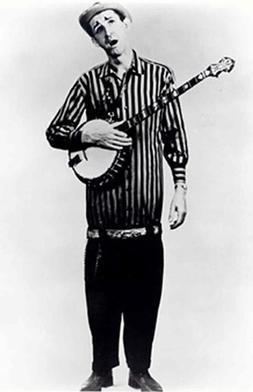 David Akeman was born in 1915 in the rural town of Annville, Kentucky. Early in his career, he earned the nickname, “Stringbean”, as members of his band took notice of his 6’5” slender frame; the endearing nickname remained with him for the rest of his career. In 1940, Akeman joined and starred as the lead banjo player in legendary Bluegrass artist Bill Monroe’s “Bluegrass Boys Band.” He soon discovered he had a knack for making people laugh and integrated comedy into his musical routine. In 1952, David took his act to the Grand Ole Opry Stage where his long running show met with remarkable success. From 1962 to 1971, “Stringbean” recorded seven albums featuring chart hits “Run Rabbit Run” and “Little Liza Jane”. During this time, David landed a supporting role on the television series Hee Haw. Audiences fell in love with his mixture of banjo playing skills and comedic routines. Hee Haw became an instant classic. A talented musician, a gifted comedian, and a widely adored entertainer, David “Stringbean” Akeman will go down in history as one of Kentucky’s most beloved performers.