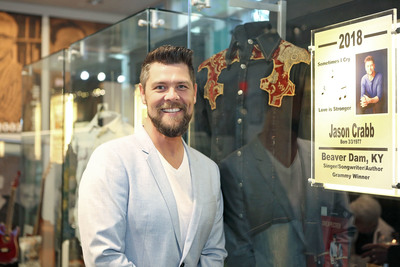 Jason Crabb was born into a talented musical family, March 3, 1977 in Beaver Dam, Kentucky. In 1995, The Crabb Family musical group formed and for over a decade enjoyed overwhelming success. The group produced eight number 1 hits on the Gospel Billboard Charts and won a total of 11 Gospel Music Awards between the years of 2000 - 2007. Jason set out on a solo musical journey in late 2007. His debut single, “Somebody Like Me,” was named 2008 Song of the Year and the self-titled album earned a Grammy Award for Best Southern Country/ Bluegrass Gospel Album of the Year. Over the past decade, Jason has been awarded Male Vocalist of the year 5 times, Artist of the year 4 times and has recorded the Song of the Year on 4 different occasions. In 2012, Jason wrote and published the book Trusting in God to Get You Through, which gives readers an inside look at his hope, faith and relationship with God. Jason Crabb has proven he is a man of incredible musical and entertainment talent and continues to establish himself as one of the most influential and inspirational artists of his time.