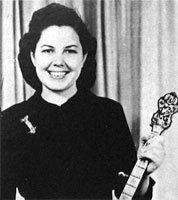 Molly O’Day was born on July 9, 1923 as Lois Laverne Williamson. She was raised by a coal mining family in rural Pike County Kentucky. O’Day began singing and playing guitar in a band with her brother Cecil, better known as “Skeets” on fiddle, and her brother Joe, better known as “Duke” on banjo. O’Day’s brother Skeets began playing in a radio band called Ervin Staggs and His Radio Ramblers in Charleston, West Virginia in 1939. O’Day soon followed and joined the band under the stage name “Mountain Fern.”

A year later she adopted the stage name “Dixie Lee Williamson” and began touring with the band, the Forty Niners. In 1941 she married Forty Niner’s guitarist Lynn Davis. Also that year through 1943 she made several appearances on the Renfro Valley Barn Dance in Renfro Valley. Although the Forty Niners were very successful, Davis changed the name of the band in 1945 to Cumberland Mountain Folks. In 1946, the band
became a mainstay in Louisville, Kentucky. She then took the name “Molly O’Day” due to the fact that there was already a Dixie Lee. The duets O’Day performed with her husband Lynn were a hit, but it was her
powerful solo performances that won over audiences.

In the mid-1940s, O’Day began performing songs written by Hank Williams Sr. whom she had known from her radio circuit days. It was Williams who introduced O’Day to her most beloved song, “Tramp on the Street,” which was originally written by Grady and Hazel Cole. When Fred Rose of Acuff-Rose record publishing house heard her sing “tramp”, he immediately signed her to Columbia Records. “Tramp on the Street” was among the many songs she recorded in her first studio session in 1946.

These recordings further propelled O’Day’s popularity but her success began to take a toll. O’Day and Davis stayed out of the spotlight for much of the following year, but in late 1947 she returned to the studio where
she recorded her hit “Matthew Twenty-Four.” In 1949 she returned to the studio where she recorded “Teardrops Falling in the Snow,” “Poor Ellen Smith,” and “On the Evening Train,” written by Hank Williams.
The album that resulted was chosen for the Smithsonian collection. “Teardrops Falling in the Snow” was billed in the Smithsonian Manual as “a recording which unites one of the greatest pure country singers with one of the most compelling songs about the tragedy of war.” By 1951 O’Day and the Cumberland Mountain Folks had made their last recording with Columbia Records.

O’Day recorded some more over the next couple years but began turning away from show business to perform in churches instead. In 1954, her husband Lynn became an ordained minister and in the years to follow, the
couple began preaching in the coal mining communities throughout West Virginia. Throughout the 1960’s O’Day recorded for a few small gospel labels including REM, a small studio in Lexington, Kentucky, and GRS
records. REM was operated solely by Robert Mooney, a former employee of King Records, and he was determined to record “real country”. So Mooney sought to find Molly O’Day. Her only commercial record after
leaving Columbia was recorded for Starday in the mid 60’s.
In 1973, she and Davis began hosting a daily gospel radio program on WMMN-FM Huntington. Molly O’Day passed away from cancer in 1987, but her legacy lives on as the pioneering female vocalist who helped
redefine the role of the female country solo artist.