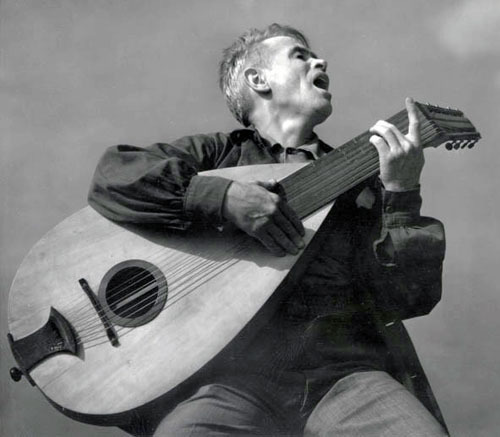 Music played an important part in the early life of John Jacob Niles, and he would spend his life collecting, composing, and performing folk songs. By the age of 15 he had begun collecting songs in the Appalachian
Mountains, a habit he would continue while serving as a ferry pilot in the U.S. Air Corps during World War I. Niles remained in France after the war, studying music in Paris.

He would continue his studies for two more years at the Cincinnati Conservatory of Music upon returning to the United States. In 1921, he came to New York where he met the singer Marion Kerby. Kerby shared his love of folk music, so the two decided to work as a team, traveling throughout Europe and the United States.

Niles wrote a number of classic folk songs that are often mistaken for traditional material, including, "Black Is the Color of My True Love's Hair," "Go 'Way From My Window," and "I Wonder as I Wander." He recorded
numerous albums, including Early American Ballads (1939) and American Folk Lore (1941).  The Songs of John Jacob Niles was published in
1975 and Niles would continue to perform publicly until two years before his death in 1980. Part Renaissance man, part traveling minstrel, Niles left an invaluable body of recordings, folk song collections, and compositions behind. His work has greatly aided the preservation and continued vitality of American folk culture.