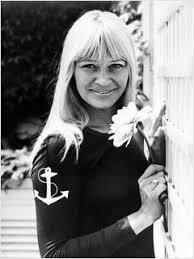 With her long, flowing, blonde hair and crystal-clear soprano vocals, Mary Travers was a major influence on the folk music of the 1960s and '70s. A founding member of Peter, Paul And Mary, Travers, not only became
one of the most commercially successful folk performers, but, used her position to become an inspirational political spokesperson.

A native of Louisville, Kentucky, Travers grew up in New York's Greenwich Village. As a youngster, she became enchanted with the American folk songs played by The Weavers, Leadbelly and Woody Guthrie. While in high school, Travers became a regular performer at the Sunday afternoon folk music sessions at Washington Square Park. Together with a teenage group, The Songswappers, Travers appeared twice at Carnegie Hall and
recorded with Pete Seeger. After singing in the chorus of a short-lived Broadway show, Travers balanced work in the literary and advertising field with appearances in New York clubs at night and weekends.

Shortly after releasing a "greatest hits" album, "Ten Years Together," in May, 1970, Peter, Paul and Mary announced their separation. Travers remained active as a soloist, releasing five albums and performing in college and clubs throughout the United States. In addition, Travers lectured at colleges on "Society And Its Effect On Music", hosted a music and interview show on Radio Pacifica (KPFK) in Los Angeles and produced, wrote and starred in a television series for the BBC.

Peter, Paul and Mary reunited 1978 for a benefit concert, Survival Sunday, that Ywas organized and produced at the Hollywood Bowl. Their performance was so encouraging that they agreed to resume their partnership. For the next two decades, Travers continued to record and perform approximately forty-five concerts each year with the trio.