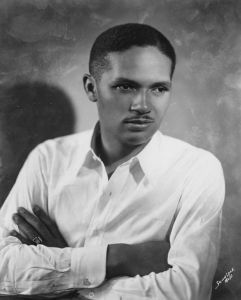 Todd Duncan was one of the groundbreaking figures in American art-song, as the first Black performer to join the New York City Opera, and also the original Porgy in George Gershwin's Porgy and Bess.

Born Robert Todd Duncan in Danville, KY, he earned a B.A. from Butler University in Indianapolis, and an M.A. from Teacher Collegew at Columbia University, before joining the music department faculty at Howard University in Washington, D.C.

He began his operatic career in 1934 with a production of Mascagni's Cavalleria Rusticana with the Aeollian Opera, and sang with various black opera companies, in the days when that stage was still as segregated as most others in the world of high art. The music critic Olin Downes, who had seen Duncan perform, urged George Gershwin to audition Duncan in 1935, when he was trying to cast the role of Porgy in his opera Porgy and Bess. The composer had already auditioned more than 100 baritones but offered Duncan the part after hearing him sing 12 bars of an aria from an Italian opera. Ironically, Duncan wasn't enthusiastic about accepting the role—he identified Gershwin as a Tin Pan Alley composer, of popular songs, whereas his repertory and preference lay with the works of Schubert, Schumann and Brahms.

He heard what Gershwin had written, accepted the part, and sang 124 performances of Porgy and Bess in 1935, and did it in revival in 1937 and 1942. Porgy and Bess opened up concert stages to Duncan throughout the United States while he, in turn, opened up the world of art-music to Black performers. He joined the City Opera in 1945, making his debut in Leoncavallo's Il Pagliacci, the first Black singer ever to sign with the company, and the first Black performer ever to work in an opera with an otherwise all-white cast. His work heralded the desegregation of that part of the musical world.

Duncan left Howard University in 1945, as his operatic and concert career demanded ever more of his time. In 1949, he played the role of the Zulu minister in the Maxwell Anderson-Kurt Weill musical Lost In The Stars. As a recitalist, Duncan sang more than 2000 performances in 56 countries over a period of 40 years, and was in constant demand for operatic productions and the theatrical stage. He made a recording of the key songs from Porgy and Bess with Anne Brown, the original Bess, for Decca in the early 1940's.

Duncan later returned to Washington, D.C. and also joined the faculty of the Curtis Institute in Philadelphia, becoming a renowned teacher.