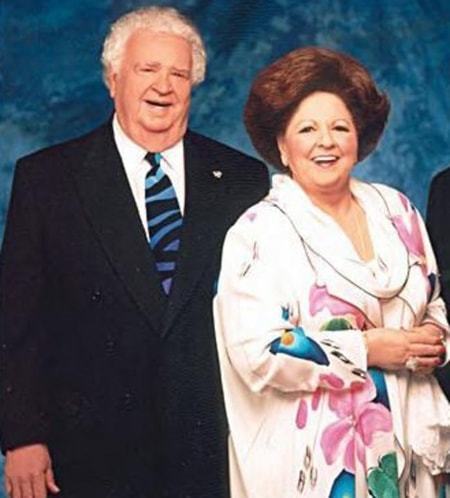 The Happy Goodmans have been traveling and spreading the Gospel of Jesus Christ for over 50 years, and the journey has been wonderful.
The Happy Goodman Family has made many changes in their personnel that appeared with them down through the years. The original Happy Goodman Family began singing in the 1940’s and was founded by
Howard (Happy) Goodman. He taught each of his seven brothers and sisters to sing and play instruments for the Lord.

The family sang anywhere the opportunity was given. On street corners, tent meetings, church services and radio. They eventually had their first television program in Asheville, NC. After many years of traveling and
singing with his brothers and sisters (Gussy Mae, Stella, Eloise, Ruth, Sam, Rusty and Bobby) Howard finally met his soul mate for life, Vestal Freeman. They left a concert in Nashville, TN at the Ryman auditorium and drove to Tupelo, MS and married.

The Happy Goodman Family that most everyone recognizes consisted of Howard, Vestal, and his two brothers Rusty and Sam. In 1990, the last Happy Goodman Family record was recorded, titled the Reunion. This
legendary recording will certainly be known in history as one of their finest ever. Rusty and Sam, shortly after the release of this recording, went to be with the One they sang about for so many years. Howard and Vestal,
however, felt the calling on their life was to continue singing and spreading the Gospel. It was at this time that a long time friend of the family, great musician and singer, Johnny Minnick, joined them. Through the years, the Happy Goodman Family recorded many projects. Now, with a new and exciting determination, Howard, Vestal and Johnny began a new era for the Goodmans. They joined voices and continued with Howard’s original vision and started traveling, singing and recording as the Happy Goodmans.

In a small recording studio with one camera, Howard and Vestal joined many of their friends. Jake, Hovie, James, Eva Mae and others, and taped with Bill Gaither what is now the most dynamic music events in history simply called The Homecoming Series. In the year 2001 the Happy Goodmans recorded their last video and album and also began touring for what would truly be the Final Stand. After Howards passing in November of 2002, Vestal focused on their life mission statement that “you do not
retire from a calling”. With Howard’s last words to her being “sing, baby sing”! That is what she continued to do until the Lord called her home in December 2003.