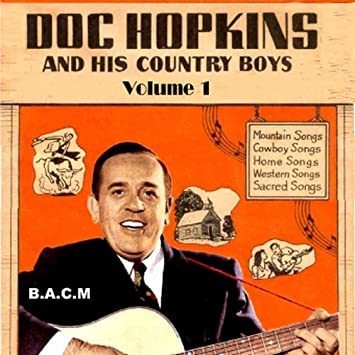 During the 1930’s and ‘40’s, the Chicago based WLS National Barn Dance show began each broadcast for their coast-to-coast radio audience with this opening line, “And now let’s welcome, “Americas favorite singer of American folk songs, Doc Hopkins.” As one of the founders of the Cumberland Ridge Runners, Doc Hopkins played and performed over seven decades for audiences as one of our nation’s most beloved and well- respected folk singers.

Legends of the mountains say a family’s seventh born son is destined to become a doctor by profession. Thus, the first name “Doctor,” was given to Doctor Howard Hopkins; born January 26, 1899 in Possum Hollow,
Harlan County, Kentucky; the seventh son of eight boys and one girl. When Doc was still young, his family moved to Rockcastle County, Kentucky, where he grew up on a farm and attended school in a one-room log house at Red Bud. At about the age of five and six, Doc began playing banjo on an instrument his father crafted from a cigarbox, the neck of a cedar tree and a possum skin. At the age of ten he began performing in
medicine shows with Dakota Jack Pearsley in and around central Kentucky.

At 18, Doc entered the U.S. Army and served two years in France during World War I. He was honorably discharged at the end of the war. Following his time in the service, Doc traveled and performed in medicine shows all across the country. Upon returning home he formed the band the Krazy Kats and performed during half time of sporting events and occasionally on local radio broadcasts.

In the early 30’s, John Lair, a friend from his Red Bud school days, managed a show at WLS in Chicago and encouraged Doc and his band to travel to Chicago to perform on the radio. Along with John’s help managing the group, the boys moved to Chicago and renamed the band The Cumberland Ridge Runners.

For two decades Doc Hopkins was featured on top rated, nationally broadcast radio programs, including “The Dinner Bell Program,” the, “Smile a While Program,” and the “Merry-Go-Round” show. Doc was a master at singing the old mountain ballads and American Folk songs. Thousands of fans across the country fell in love with his style of music and his down-home folksy renditions of “I’m here to get my baby out of jail,” “Honey in the Rock,” “My Grandfather’s Clock” and “We Buried Her Beneath the Willow.”

Doc’s unique way of combining his spoken word with music and his accomplished three-finger-and-thumb guitar style, won the admiration of music fans across the country, but it was Doc’s humble good natured
personality that won the HEARTS of his fans – he was once asked about his talents as a musician and a singer- Doc simply said, “I just sing the same as all us folks do down in Kentucky.”

Just like in the early days of traveling across the nation, playing at medicine shows and performing on our country’s highest rated radio broadcasts, Doctor Howard Hopkins will always be known as: “Doc Hopkins, America’s Favorite Singer of American Folk songs."