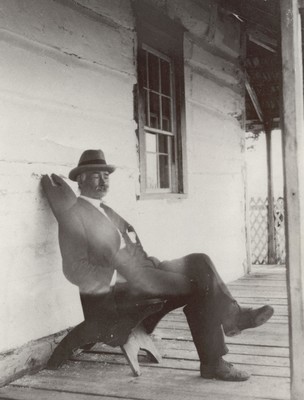 9. A) The officer's Dwelling House

The officer's dwelling house was home to many chief factors over the years, in the year 1896 the Murray family lived here. Mr. Murray was 'the clerk in charge' of the fort.

“Oh you should see this house on the first of January, all day long the doors are open to all, just like in the old country. First thing Mr. Murray calls company servants, those not forbidden to drink alcohol, calls them in for a tumbler of rum just before the arrival of the first Carriers.

And that might be as early as ten in the morning.

Everybody is given two biscuits sweetened with canned currants, a cup of lime juice, and a length of tobacco. Some years it takes two hundred pounds of flour just to make enough biscuits.

Later there’s a dance for all the residents and their families.

We celebrate Christmas and Easter as well, but nothing like the way we celebrate New Year’s Day.”

In 1896 Murray ordered a large number of music rolls for the Celestina, and it is possible that Sanchez, the pack train operator, was a guest on occasions as well judging by the fact that the Mexican National Anthem was in the order of music.

We also know that Mr. Murray was an avid gardener, judging by the variety of seeds he ordered and that he owned and played an organ. He taught the Traill children when they were sharing the Officers Dwelling House and also used to play on Sundays during Presbyterian services held in the parlor of his home.

Mr. Murray retired in 1914 after 44 years of service and instead of leaving he chose to reside in Fort St James in a house he built on Stuart River. Murray’s wife, the former Mary Bird, lived with him at Fort St James during his tenure at the post. Unlike her husband, who was a Presbyterian, Mrs. Murray was a Roman Catholic, but there is no evidence that either the difference in their faith or the eleven-year gap in their ages caused any conflict between them.

Mrs. Murray was sufficiently independent to travel to Edmonton to visit her family in the fall of 1895. Mr. Murray accompanied her only to Quesnel. From there she proceeded without assistance or companionship to Ashcroft, where she boarded the train to Calgary and from there to Edmonton, a remarkable journey considering the fact that she was subject to frequent epileptic seizures.