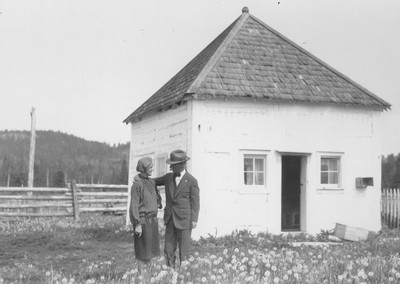 A building like this one was erected in 1889. It was called the Interpreter's House because a Hudson's Bay employee would live here while working as an interpreter for the site. James Boucher was one of these interpreters and lived in the house for many years. The orginal building burnt down in 1926.  Nowadays this building service as a staff office.

Pictured: The Interpreters house in the 1920's, the current house is a recreation of this building.

A.G Morice writes about one of the most famous interpreters to live and work at the Fort. Among Simon Fraser’s crew was a young man, Jean Baptiste Boucher, who was known under the nickname Waccan. Over the years Waccan became a well known and respected figure. He worked as an interpreter, an enforcer and some occasions an executioner.

When there was little food Waccan would travel to other camps and return with provisions. If the official head of the Fort left, Waccan would often be put in charge despite not being an officer. On more than one occasion Waccan traveled to avenge the death of a company employee. Waccan lived and worked in the area until his death, over the years Chief factors came and went but Waccan always remained.