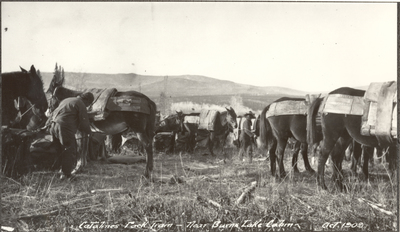 The guest’s house was built in 1884, it was a residence for company employees, pack train hands, boat crews and visitors. The building also served as an early schoolhouse and as a private residence in the 1930s and 1940s.

In the 1896 era, if you walked out on the fort grounds, you may have met George Holder, Vitalle LaForte, Louis Grostete, Donald Todd and many more. These men often performed many different tasks such as cutting firewood, threshing hay, and manning the schooner.  Pack trains were integral to the function of the fort and their operators were often colorful characters who would bunk down in the Men’s House. This next character was one of BC’s most famous pack train operators, in fact, there is a statue of him at the visitor centre in Hazelton. He also was known quite well in Fort St James. Sperry Cline met and then wrote about Cataline.

“Jean Caux, or Cataline was born at Oleron, in Bearn, a separate independent kingdom in France near the Spanish border. He started packing with mules between Barkerville and Yale in the mid 1860’s with his partner. In appearance, Cataline was every inch the frontiersman. His hair reached his shoulders, He was broad shouldered, barrel chested, and his usual headgear was a wide brimmed sombrero. He always wore a hardboiled shirt and started each trip with a new one.

One of Catalines best known traits was his unusual hair tonic. His favorite drink was cognac, after each drink he would take a small portion of alcohol and rub it into his hair, saying as he massaged his scalp “a lidda on the insida, a lidda outsida”.  Some say that he considered this a cure for baldness, others that it prevented a hangover.” (Quote Sperry)

It was Catalines claim that he never lost an article, but on one trip, a small parcel disappeared. It happened that one of the packers thought something had gone rotten and had thrown the original package away. The consignee, however, was not the loser, for on his return to Hazelton Cataline sent a man back with a replacement: one small package containing two pounds of Limburger cheese.