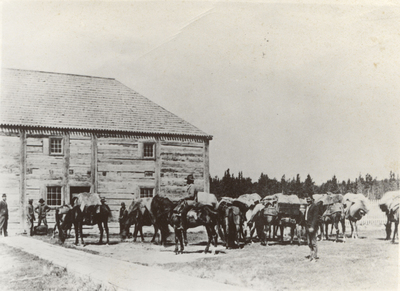 The warehouse is one of the finest surviving examples of a Red River frame fur trade building in Canada. This style of construction was originally used at fur trade posts in the Red River Valley of Manitoba, thus the name. This building style has also been called post on sill or piece on piece.

Pictured: A pack train in front of the Fur Warehouse

The Fur Warehouse was built in 1888, over time the wood has revealed marks left behind by the men who built it. The oils in their hands left distinct prints that can be seen on the ceiling of the warehouse to this day. The walls are also covered in tally marks and the signatures of people who worked at the fort. As the workers counted hides, they would mark the walls to keep track. Listen as A.C Nurray recounts his work at the fort counting furs.

“We repriced every skin here. Packs were opened and repacked and recounted. I went over the lot myself, over the all, I have counted thousands of skins in my time, perhaps more than any other officer in the company. These furs and our own were then sent to Victoria and repacked for London. Going in the company ships around the horn.”