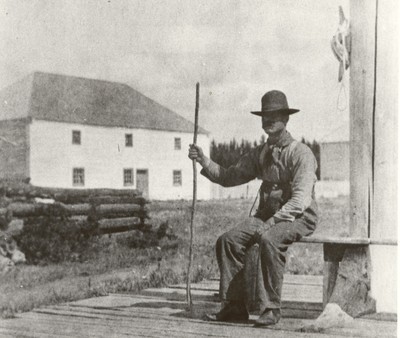 In the summer, the staff raise the Hudson's Bay flag every morning when the site opens. This maintains a tradition that dates back over 100 years when this place was an operating fur trade post.

Pictured: A man sitting at the base of the flagpole

"In 1876 I joined the Hudson’s Bay service, on condition that they would send me inland. I started on the 1st of June. We started on with boats across lake Winnipeg, it took me 4 months and 3 days from Winnipeg to this place.

Coming up here we did steady traveling, traveling hard. We’d sail on the lakes with a fair wind, the guide would put up the sail and away we would go, and camp on the other side. We made 40 portages. The longest portages were at Lac La Loche: 25 miles. And from Mcleod Lake to here: 80 miles. Besides the portages of 14 or 15 miles at Hudson’s Hope and Rocky Mountain Canyon.

The men would carry a pack of about 200 pounds across the portages and run with it. They carried it on the head, that is, by strap across the forehead. Some particularly strong men could carry 300 pounds."

When the Northwest Company amalgamated with its rival the Hudson’s Bay Company in 1821 the company operated under the Hudson’s Bay name. That’s the flag that flew here from 1822 to 1905. If you look closely, you’ll see the letters H B Co in white against the red background.

Look how steep the tramway is, it took 6 to 8 men with ropes over their shoulders to pull the loaded carts up to the warehouse. And just imagine what it took coming down to prevent a cart full of furs from ending up in the lake.