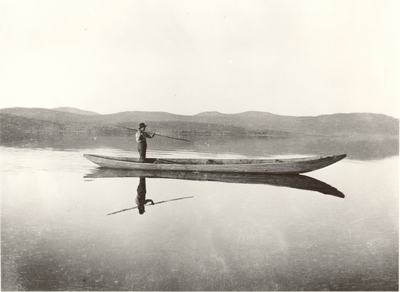 As you listen enjoy the view of Nakalbun/Stuart Lake. Walk along the pathway to the staircase and then ascend to the flagpole.

If you are unable to take the stairs, or during adverse weather conditions where the path has become muddy, walk through the ground to the flagpole. (Route on Map)

Pictured: A canoe on Stuart Lake

Welcome to Fort St. James National Historic Site. You're about to step back to a time when the fur trade was the economic powerhouse in British Columbia, and Fort St. James was the capital of New Caledonia. Soon you'll be walking down a path along the grassy banks of Stuart lake, you'll come across the flagpole with the Hudson's Bay company flag flying in the breeze, and then you'll climb the stairs and walk directly into 1896.

Long before the first Europeans arrived all the land and waters before you belonged to my ancestors, a people called the Carrier. We trapped waterfowl, rabbits, and beaver. But it was the waters that gave us life. Every July and August thousands of salmon swim up the river to spawn in our territory. We built weirs between the islands to direct the salmon into the traps.

Come, lets stroll along the lake to the stairs leading to the historic grounds.

"The people were living up here at Sowchea, the reserve’s still there yet. But that’s where they were living in the summertime when they saw these canoes around the point. The were singing, the canoes, were singing. And they all went to the shore to see who it was; they were singing in a strange language; something they hadn’t heard before.

So they were all there when they landed, they were white men, cause that would be Simon Fraser when they first came.

All crowded on the shore to see, they were very curious of course, they hadn’t seen any white men before. And they started I suppose, they talked in sign language, they couldn’t understand one another you know.