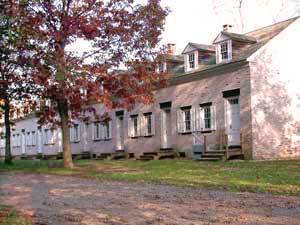 These Row Houses were originally constructed in 1832 and completed the following year.  It served as apartment-style housing for Allaire’s employees.  The only remaining Row Houses you see today are the largest and housed the skilled, or senior, workers and their families.  Families during the 1800s tended to consist of not just parents and children, but unmarried relations, cousins, nieces, nephews, and grandparents.  Up to thirteen people lived in one Row Home. The first floor was their living quarters and the second floor was for sleeping.  This block of Row Houses had a kitchen in the back.

Several other blocks of Row Houses were also built to house other workers of the village, although they are not still standing today.  They were placed on either side of the Chapel; the one to the right had eight homes and was referred to as the “White Row”. On the left side was a row of eleven homes.  For the workers living in these homes, they cooked in the main hearth of their house and did not have a back kitchen.