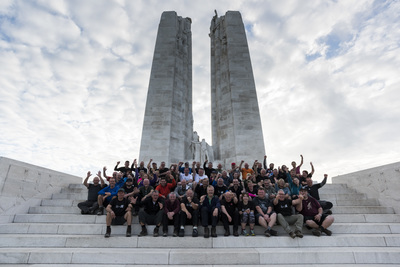 You are now moving along the southern edge of Drop Zone A. This was the drop zone for 502nd Parachute Infantry Regiment, although like most units, the Regiment was spread far and wide. 100m ahead of you is a track on the left. You are not taking this track, but the track leads to les Mezieres and a series of houses which were identified to the paratroopers as Objectives X, Y and Z. You can start walking now. Although not visible to you, these houses were the billets for the men of the 1/1261st Coastal Artillery Battery, the initial objective of Lieutenant Colonel Cole’s men. On D-Day the houses were attacked by Staff Sergeant Harrison Summers of 1st Battalion, 502nd Parachute Infantry Regiment leading a group of 15 men from a variety of units.

Despite not knowing all the men with him, some of whom appeared reluctant to take part, Summers sent one man to protect his right flank and then set out immediately towards the buildings. He charged the first farmhouse, only to find that his mismatch of a squad hadn’t followed him. On reaching the first building by himself, he kicked in the door and sprayed the interior with his tommy gun. Four Germans fell dead, others ran out a back door to the next house. Summers, still alone, charged that house; again the Germans fled. His example inspired Private William Burt to come out of the roadside ditch where the group was hiding, set up his light machine gun, and begin laying down a suppressing fire against the third barracks building. Once more Summers moved forward but this time the Germans were ready and opened fire on Summers as he moved forward. Covered by Burt’s fire he reached the door and kicked in the door spraying the interior, killing six Germans and driving the remainder out of the building.

By this point Summers was exhausted but after a short rest he prepared to move on to the next building. As he rose to go on, an unknown captain from the 101st Airborne, appeared at his side. "I'll go with you," said the captain, as he did so he was shot through the heart and killed.

Summers was again alone. He charged another building, killing six more Germans. The rest threw up their hands. Summers's squad was close behind; he turned the prisoners over to his men. At this point Summers was joined by Private John Camien and together they moved from building to building, taking turns charging and giving covering fire. Burt meanwhile moved up with his machine gun. As he charged into on the last buildings Summers was amazed to find fifteen German artillerymen seated at tables eating breakfast. Summers never paused; he shot them down at the tables. The last building was the largest. Beside it was a shed and a haystack. Burt used tracer bullets to set them ablaze. The shed was used by the Germans for ammunition storage; which quickly exploded, driving thirty Germans out into the open, where Summers, Camien, and Burt shot some of them down as the others fled. Another member of Summers’ makeshift squad came up with a bazooka, which he used to set the roof of the last building on fire. As the flames began to build, the Germans dashed out many dying in the open. Thirty-one others emerged with raised hands to offer their surrender. Summers collapsed, exhausted after nearly five hours of combat. He lit a cigarette. One of the men asked him, "How do you feel?" “Not very good." Summers answered. "It was all kind of crazy. I'm sure I'll never do anything like that again.”

For his actions that day Summers received a battlefield commission and the Distinguished Service Cross. He was recommended for the Medal of Honour, but the paperwork got lost. In the late 1980’s, after Summers's death from cancer, Private Baker and others made an effort to get the medal awarded posthumously, without success.