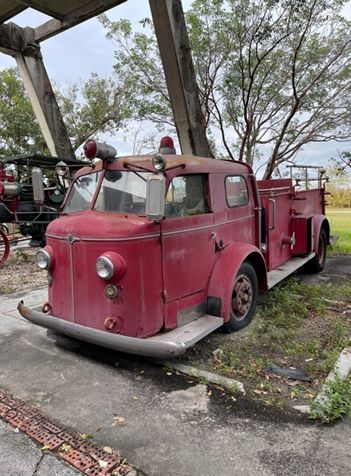 American LaFrance began delivery of the 700 Series fire engines to fire departments in March of 1947. By the end of 1950, American LaFrance had delivered more than 1,400 of these cab-forward wonders. With continuous improvements, the spectacularly successful 700 Series remained in production for 12 years.

The plain-looking 700s sported painted bumpers, a cut-down windshield header, cab doors with no side glass and compartmented rear fenders. These new economy model pumpers were powered by Continental engines instead of the usual ALF V-12s. More than 3,000 of these classic fire fighters were delivered before the last one was built in 1959.

The American LaFrance Fire Truck was donated to the museum in the late 1980s.  It is currently not operational.