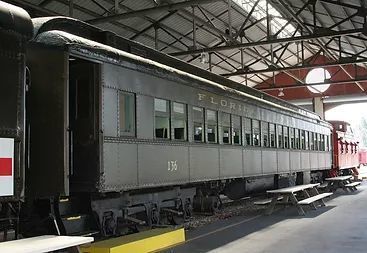 This car was in passenger service between Jacksonville and Key West via the famous "Over-Sea Railway". In Key West continuing to Cuba transfered to a connecting Flagler System steamship. Built in 1925, this railroad car played an important role in the evacuation of a portion of the Florida Keys as part of preparations for the Labor Day hurricane of 1935.This car was retired in 1958. It was donated to the Museum in March 1959.

The 1 3 6 serves as the museum's primary operating passenger car every first Saturday of the month.