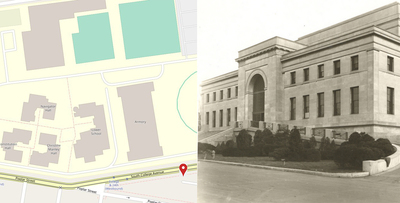 This large building is the school’s gymnasium, known as the Armory, built between 1922 and 1924. Like the high school, it was designed by the architect John T. Windrim. Windrim’s father, James H. Windrim was an early alumnus and a previous architect for Girard College. The building is designed in a classical revival style. The armory was originally created for gym classes, indoor recreational use, musical instruction and to allow the school's battalion to drill inside during inclement weather, hence the name Armory.  Although Girard has never been a military school, a military style-battalion was part of the curriculum from 1869 up until 1969, intended to promote discipline, physical fitness, teamwork, and leadership.

Today the building serves primarily as Girard College's gym; the main floor of the Armory holds four regulation-sized basketball courts which are side by side and a raised track above the courts. As well as playing indoors, often children would play sports outside in the surrounding fields and playgrounds. Many students enjoyed baseball and in the early years of the school some alumni even went on to play for major league for teams like the Philadelphia Phillies, The St. Louis Cardinals, the New York Giants, and the Pittsburgh Pirates.

Throughout the years the armory’s large space has been served other functions as well.  Today it is sometimes used for large scale events, such as the city-wide Martin Luther King day of service, but in 1939 the building was used to quarantine students during a scarlet fever outbreak.  After a handful of students came down with the illness, the Board of Health of Philadelphia quarantined the entire school. Each student was tested for their susceptibility and those who were vulnerable were sent to the armory to be in complete isolation from the remainder of the student body. While isolated the only requirement for students were to get weekly booster shots and to play! Alumnus John Anderson later wrote “My gosh, I didn’t believe it! From a fully-packed schedule to the assignment to do nothing but entertain ourselves what a break! Our teachers couldn’t get to us, for we were in the perfect place to do just that. Our huge armory, three floors of it, was turned into one massive playground during all waking hours…We read roller skated, played basketball, and did everything to pass the time. Perhaps the most popular form of entertainment was the relatively new game of Monopoly.”

Continue forward to the last set of buildings, which will be the last stop on our tour.