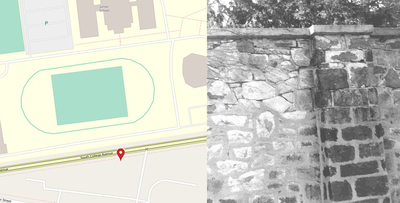 The massive stone wall towering in front of you was an original element of Girard College. From the outside, this enormous structure is the most prominent feature of the school standing at 10 feet high and 14 inches thick. The existence of a campus wall, and even its dimensions were specified in Stephen Girard’s will, which created and endowed the school. The will even indicated that the wall should be capped with marble and iron spikes, although these were never installed, perhaps due to the community fearing it might resemble the neighboring Eastern State Penitentiary.  An oft-heard legend claims that Girard’s will actually called for a 20-foot wall, and that therefore the current wall extends 10 feet below ground; these rumors are untrue.

In the late 1870’s the portion of the wall in front of Founder’s Hall was replaced with iron fencing, to allow a more scenic view into the property. The area of iron fencing was expanded in the 20th century following the construction of the High School and the Library.  Also in the 1870s, the city of Philadelphia proposed a controversial idea to straighten Girard Avenue and open 22nd street, running both through the campus, thus dividing it into pieces. But Girard College, backed by the Pennsylvania legislature, was able to deny the street straightening and the campus wall remained intact.

Continue to your left to the large gymnasium building visible above the wall.