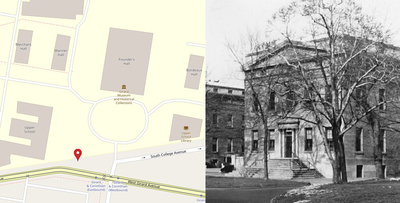 Look through the trees to the four identical buildings, two on either side of Founder’s Hall. These dormitory buildings were designed by Thomas U Walter and were part of the original construction of the school in 1848. In their early years they were creatively name, from east to west, as buildings 1, 2, 3 and 4. However in 1927 they were renamed Allen, Bordeaux, Mariner and Merchant after two of Stephen Girard’s professions, his French birthplace, and a former school president. Traditionally students have moved east as they’ve grown up at Girard and these dorms, across from the High School are for the older, high school students. The number of buildings in use depends on the number of students in attendance, which has fluctuated over the years. Today Mariner and Merchant serve as High School boys’ dormitories.

Girard College has always been a residential school. Today there are residential advisors who live in the same dorms as the students and help guide them. In the earlier years of the school, this role was filled in the younger grades women called governesses and in the older grades by men called prefects or house masters. Girard has also experimented with new ideas in residential life over the years. At one point in the early 1900s the school tested an idea where there would be a husband and wife employed as “house parents” instead of a single governess. Another arrangement from the 1940s was to move seniors into Allen Hall during their last semester. The hall was setup to test an experimental housing idea which would run similarly to college dorms, and aimed to prepare the students for a more independent style of living as well as providing extra social and development activities, including dances and outside speakers. These arrangements are no longer used today, but Girard continues to explore and innovate new ways to provide a world class residential education program to all its students.

Walk to your left to the large High School building near the front fence.