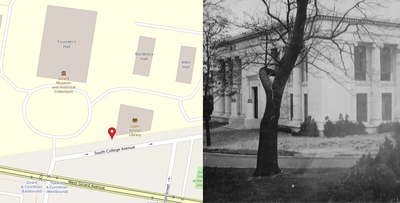 This building was designed as the school library by architect E. Wilton and built from 1931-1933 on what had been open space next to Founder’s Hall. Before it was built, the first floor of Founder’s Hall served as the library; however the school had begun to outgrow the space. The architecture of the new library was meant to compliment Founder’s Hall, although at a more modest scale. Wilton chose to give the library extensive detail and decoration, both inside and out. The building’s exterior features Ionic columns, which complement the Corinthian columns and Doric columns on the other buildings on the circle.

Girard students are encouraged to read both in and out of class and when it was built, the library became a common place for students to spend time. Some students even spent time volunteering in the library; in the 1930s these helpers wore hats and Sam Browne belts, which resembled current crossing guard uniforms and distinguished them as the children’s room helpers. Today the second floor of the building serves as a tech center and the first floor is the welcome center, housing our admissions office, but the original fireplace and internal windows bearing printer’s marks are an ongoing reminder of the history of the space.

Please continue forward and stop just past the library