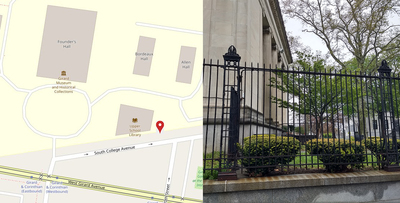 Since the school’s opening in 1848, over 22,000 children have passed through Girard’s gates, and quite a number may have even passed over the wall. When talking to alumni it’s not difficult to learn about the many creative ways Girard kids have attempted, and sometimes succeeded, in hopping over the 10-foot wall. The secluded area behind the library, with its ladder-like fence details was a popular location for attempts. Some children tried to leave permanently, to run away or to join the army. Others just wanted a thrill, an afternoon out of class, a chance to flirt with locals at the nearby shops or simply a reason to brag to classmates.

One entrepreneurial senior from the 1950s recalls hopping the wall when he sold out of supplies for his dorm-room business. Gil Bunker was cooking hotdogs on a hot plate and selling them for 15 cents each. One night he sold out and hopped the fence behind the library to get more supplies. After running to the local store on Ridge Ave he returned to Girard, hopped back over the fence, and ran up to his Allen Hall dorm steps, only to look back and see the vice president of the school staring right at him. He remembers it being a very hostile business takeover; they took his hotplate, hotdogs, buns and even his ketchup and mustard, leaving the entrepreneur business-less.

Now, turn around and cross back in front of the Girard college gate. Find a spot from which you can see the two large dormitories to the left of Founder's Hall.