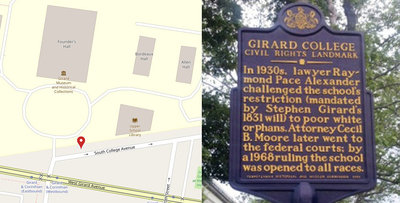 Stephen Girard’s will specified that Girard College was created for “poor, white, male orphans. While the school’s admissions policy today still focuses on children in need, it is now proudly admits boys and girls of all races. However confronting the will’s restrictions on race proved to be a lengthy battle and a key struggle of the northern civil rights movement. During this struggle the presence of the campus wall was both a physical and a metaphorical barrier, which separated the entirely white school from the largely African-American neighborhood which had grown up outside its walls.

In 1954, the same year as Brown vs Board of Education, African-American activist, lawyer, and Philadelphia city council member Raymond Pace Alexander brought a lawsuit on behalf of boys denied admission of the basis of race. Although the case ultimately went to the Supreme Court, it did not result in the school’s desegregation.

In the 1960s, Cecil B. Moore, the newly elected leader of the Philadelphia’s NAACP, picked up the baton and beginning on May 1, 1965 he organized daily protests outside of the wall of the Girard College. Girard College rapidly became Philadelphia’s central symbol for the struggle for racial equality. On August 3, 1965, Martin Luther King came to Girard and gave his support to the activists, making a speech announcing that “the walls would crumble like the walls of Jericho.” After 7 months and 17 days of daily protests, a new lawsuit was filed in December 1965. This new suit eventually forced the desegregation of the school and in 1968 the first four African-American boys and the first two boys of Asian descent, were enrolled as students.  The admission of girls came 16 years later in 1984.

You can find out more about Girard and civil rights in our Founder’s Hall museum; another excellent online resource is the web exhibit Civil Rights in a Northern City from Temple University.

Please continue forward, away from the gate, and stop at the large building visible through the fence.