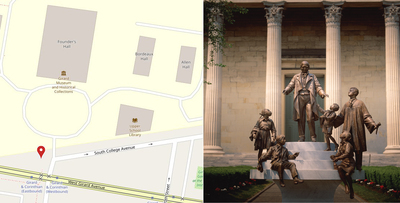 Peek through the fence and see if you can spot the statue of a man surrounded by schoolchildren in the center of the main circle. This is Stephen Girard, the founder of Girard College. He was born in Bordeaux, France in 1750; his father was a sea captain and his mother died when he was only 11. Girard went to sea himself at the age of 14 and became a captain at 23, buying and selling cargo in his earliest business ventures.

Girard landed in Philadelphia in 1776 and would remain for here for the rest his life. He married an American woman named Mary Lum in 1777 and in 1778 he became a citizen. After the American Revolution, Girard continued buying, trading, investing purchasing property, and profiting from these decisions. He sent ships trading around the world and was rapidly becoming one of America’s richest citizens, although personal tragedy struck as his wife Mary was diagnosed with mental illness and ultimately institutionalized in 1790. They had had no children together, although the Girard household was a busy one with both free and enslaved servants, apprentices, and sometimes Girard relatives. In 1793 Yellow fever struck Philadelphia and spread rampantly, killing approximately 10% of the city’s population. Stephen Girard worked fearless with the sick, taking over management of the Bush Hill fever hospital and caring hands- on for patients.

In addition to his trade and landowning, Girard invested heavily in the newly-created First Bank of the United States and by 1811 was the largest share owner and wealthiest man in America. When the First Bank’s charter was not renewed, in 1812 Girard purchased the bank building and opened his own bank. During the war of 1812 Girard risked his fortune by agreeing to fund half of a $16-million-dollar loan to the U.S. Treasury to aid in the war.

Throughout his life, despite his vast wealth, Girard continued working as a hands-on businessman; in banking, trading, shipping and on a farm he bought in what is now South Philadelphia. On December 26, 1831 Stephen Girard died from complications of influenza and pneumonia at the age of 81. Even in death he continued to give generously. In his will he gave to many institutions including Pennsylvania Hospital, the Orphan Asylum of Philadelphia, the Pennsylvania Institute for the Deaf and Dumb, and left money for the creation of a day school in Passyunk Township. He also provided finances for family members, employees, and for his enslaved woman Hannah, whom he freed in his will. Having spent a career on the waterfront he left money to the city to create Delaware Avenue.

However the largest, most extraordinary gift was to create and endow Girard College, which ultimately received about 6 million dollars out of Stephen Girard’s $7. Million fortune. This was the largest philanthropic gift to this point in American history and it was made to help disadvantaged children. The school would open on January 1, 1848.

Now turn your attention to the building with the large marble columns.