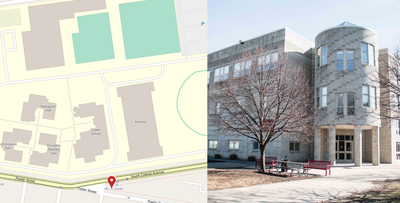 We conclude our tour with the most modern buildings on campus. The current elementary/middle school complex was created in 2001. Although these buildings are only 20 years old, the idea of housing the youngest students at the far west of the campus is not new. An earlier “West End” complex for early elementary students previously stood on the same plot from 1931-1982. The current complex includes classroom space, library, auditorium, amphitheater, three dormitories, and, one of the favorite areas of student life, an elementary/middle dining hall.

Like everything else at Girard, food service has evolved over the years. Up until the early 1900s, all students were served coffee with their meals, even the 6-year olds; that was later dropped in favor of milk. In the early days meals were served by staff waiters, then the job was assigned to student servers; today the dining halls are cafeteria style. One enduring Girard food tradition is the Girard Ginger, a large ginger molasses cookie developed in the 19th century and traditionally served on Sundays. They were famous enough to be included in the first Betty Crocker Picture Cookbook in 1950. Although no longer part of the standard meal rotation, gingers are still baked on campus and served at special events and alumni functions.

You can conclude your tour here, or continue walking around the wall for an additional half mile to a Mural Arts mural celebrating the Freedom Fighters who worked to desegregate the school.  If you are ending here, thank you for joining me on this outside the wall tour. For more information about Girard College’s history, present, and about visiting “inside the wall” check out our website at girardcollege.edu and our museum site at FoundersHall.org.