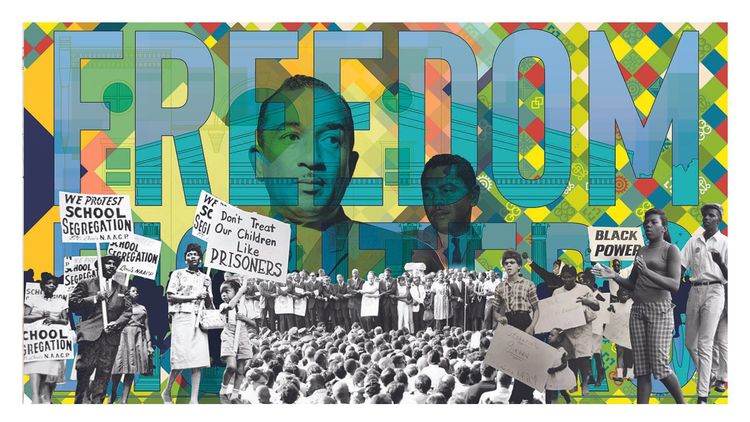 This mural was created by artists Felix St. Fort and Gabe Tiberino, with the Mural Arts Philadelphia organization, and it was completed in November 2021. It honors the Cecil B. Moore Freedom Fighters, a group of young Philadelphia residents whose efforts were integral to the desegregation of Girard College. The Freedom Fighters, previously known as the Young Militants, were attracted by Moore’s drive to integrate the school.

Protests took place outside the wall around Girard College every single day for 7 months and 17 days—from May 1st to December 17th, 1965. Wholly dedicated to the cause, the Freedom Fighters would head straight to Girard after spending the day in school, and remain there until night. They would organize in a large group, picketing with signs and singing freedom songs. Many youths were motivated to join the Freedom Fighters after witnessing the prolonged fight against racial injustice in the South on the news. It was a common sentiment at the time that public marches and demonstrations were more of a Southern practice, so when the opportunity arose here in Philadelphia, many were eager to take part in the protests. The fact that Girard was an all-white school located in a predominantly Black neighborhood was a symbol for the state of civil rights in the northern United States.

The mural combines a number of elements to fully capture the historical and cultural significance of the Freedom Fighters and their contributions. It includes recreations of actual images from the protests at Girard College, and portraits of Cecil B. Moore and the Freedom Fighters, like Eugene Dawkins, known as “Freedom Tree”; he is the tall man shown protesting in a white shirt and black hat on the right side of the mural. The word “FREEDOM” in the mural includes architectural elements of Founder’s Hall. St. Fort and Tiberino also incorporate Adinkra symbols in some of the colored squares in the top right corner of the mural. These symbols represent concepts that can be found in traditional Ghanaian proverbs. For example, the symbol of an arrow contained within a circle and a square in a red square near the top of the “M” in the mural represents leadership and service. The four circles in a green square near the inside of the “M” represents perseverance.