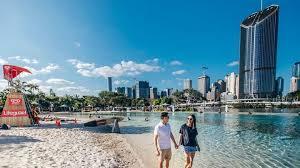 The Streets Beach in front of you, as well as the lagoon further down the path to your left, are both man-made attractions and are very popular within South Bank. The Parklands were opened by South Bank Corporation in 1992 and cover 17 hectares of riverfront land. Open 365 days a year, the Parklands feature cycling and walking tracks, swimming facilities, picnic and barbeque areas and more. Events are often scheduled year-round and it is worth exploring Grey Street, Little Stanley Street and award-winning River Quay for a great deal of restaurants and cafes. In the first year of opening more than 6.3 million people visited the Parklands proving that South Bank Corporation had successfully created a space that was inviting for tourists and residents alike. Over the next three years urban renewal continued with the construction of Rydges Hotel, Queensland Conservatorium of Music, Griffith University, Park Avenue residential apartments and Brisbane Convention & Exhibition Centre. The Arbour is the walkway we have been following and as you can see by its impressive architecture has won many awards. 433 curling, galvanised steel posts dressed with vibrant magenta flowers flow for one kilometre through the Parklands. If we continue walking down this path, to the right will be another must see attraction of the Parklands. The Rainforest walk is an incredible boardwalk through green, lush and local trees and plants. A perfect spot for taking a close the eyes, take a breath and to find some tranquillity in the middle of a bustling city. Discover colourful lizards, birds and fish along the way. I suggest pausing the audio and exploring this walkway before reaching the South Bank Cultural Precinct and our next stop, the Brisbane Wheel. Follow the Arbour walkway all the way to the end to reach the next destination.

What question/s will you ask the participants at this stop? (min 2 questions)

1.    Can’t you just imagine being a worker in one of these tall skyscrapers and coming down to this area during a lunch break?

2.    How many people do you think visited the South Bank Parklands over the first year it was open?

Prev Next
South Bank: Once Upon a Time
HOME