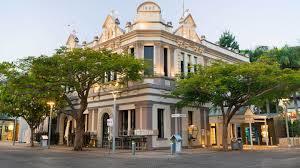 At this stop we will be viewing two buildings built in the 19th century and discover how the World Expo 88 contributed to showcasing South Bank to the world. The Allgas Building and The Plough Inn, both built in 1885 have made the Queensland Heritage Register for their ‘picturesque front facade’ and ‘rare surviving remnant of the commercial and shipping heart of South Brisbane.’ If you are standing in the middle of the Stanley Street Plaza crossroads inland to the right on the corner is the Allgas Building. While little remains of the original interior, the external views of the building, above ground floor, remain the same. The ground floor has been modified throughout the life of the building. The Allgas building once functioned as a drapery and outfitting firm, bank, restaurant and now operates as an administration centre. Continuing north through the plaza you should see to your right the next historic building called The Plough Inn. Also constructed during South Bank’s commercial boom, served as a hotel and eatery and today operates as a renowned restaurant, bar and space for function and events.

After the floods and World War II downfall, South Bank had been reduced to a couple old hotels, light industrial buildings and boarding houses. In 1984, the choice was made for South Bank to host the World Expo 88. It proved to be an excellent decision as this event was the prime catalyst for the growth of South Bank and the birth of Brisbane as a vibrant, world class city. World Expo is a gathering of people from all around the world to display their art and culture. This event is held every five years. The World Expo 88 was officially opened by Queen Elizabeth II on 30 April 1988 and the eyes of the world were focused on South bank. The event was expected to attract 8 million visitors and showcased a program of entertainment and events. By the time it finished six months later over 18 million people had experienced the Expo and new life was sparked into the South Bank Precinct. Once the extremely successful World Expo 88 was over, people were recognising the area’s potential as public space and lobbied to keep it as a public parkland. In 1989 this was approved by the Queensland Government and then began the development of the now impressive South Bank Parklands we will explore at our next stop. Exit the plaza up the steps between the North and South Pavilions opposite the Allgas Building to reach the next destination, Streets Beach.
What question/s will you ask the participants at this stop? (min 2 questions)

1.    What do you think these building have be used for over the years?

2.    Do you know of any other World Expo locations from other years?

Prev Next
South Bank: Once Upon a Time
HOME