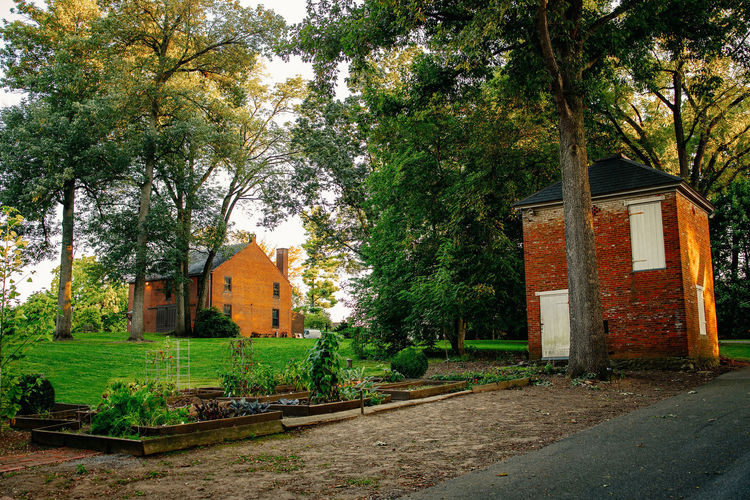 Now let’s explore the outbuildings. You can stay where you are, or, if you like, take a closer look. The two-story building on your right along the driveway is the smoke house and the ice house. On your left, the small brick building is the outhouse or privy. And further away is the carriage house. This is the second carriage house, built in 1893, when the property was consolidated. Mr. Buchanan’s carriage house stood in what is now the back yard of the large white house on your right. First, the smoke house/ice house.

This is an unusual arrangement. Most of the time, the smoke house and ice house would be separate buildings, but given their use in different seasons, there was little heat transfer. Tools found on the second floor indicate the smokehouse was used for preserving small game and birds. If you were to open the door on the first floor, you’d fall 12 feet! Ice cut from local ponds was stored well below ground with straw and sawdust to insulate it through the year.

Adjacent is an example of the sort of produce garden Mr. Buchanan had on the property. What was grown here was used by the family. Soon after moving in, Mr. Buchanan told a friend he was on the hunt for someone to tend it…

“I have a large and excellent garden – that is, it would be excellent if properly cultivated, & I wish to procure a good gardener.”

And he did - several of them, in fact, over time. Housekeeper Miss Hetty also worked in it.

Next, about the privy. It’s on your left.

This was one of the most important buildings on the Wheatland farm. Also called an outhouse, it was the standard toilet building for most Americans in the 19th century. But, says Pat Clarke, this one is unusually large….

“This building was in use before indoor plumbing was an option. The building has two rooms - one has an impressive five seats; the other door opens to a section with only three seats. When William Jenkins had Wheatland built, he knew he would have to accommodate his large family of 12 children, his wife and himself, and his large staff. The five seats differ in size, so children did not have to perch precariously over a large hole with the possibility of falling into the ‘night soil!’. The side with the three seats was likely used by staff members.”

Although most of us are used to privacy in the toilet, modesty meant something different to 19th century Americans. Rather than viewing a 5-seat privy as uncomfortable, they would have viewed it as a luxury. Archeological evidence suggests it was in use regularly until the 1880’s.

Today, privies can yield important secrets to archaeologists and historians. Before municipal pickup existed, household residents used privies to deposit their daily trash. The contents of privy pits can reveal a lot about daily life in an earlier era.

If you want to look in later, please do. First, though, the carriage house.

In June 1884, President Buchanan’s niece, Harriet, sold the mansion and the 22-acre Wheatland farm to Mary Willson. On her death in 1886, her daughter and son became equal owners. In 1893, they sold off 12 acres, making the new carriage house a necessity. Today, the first floor serves as classroom and event space. The second floor houses the office of the Director of President James Buchanan’s Wheatland and the headquarters of the Junior League of Lancaster.

To continue your tour, return to the stairs or asphalt walk way you used before, and proceed to the junction. Bear left and walk past the Willson Memorial building. Stop when you reach the point where an asphalt walkway goes left and a mulch and pine needle pathway goes right.