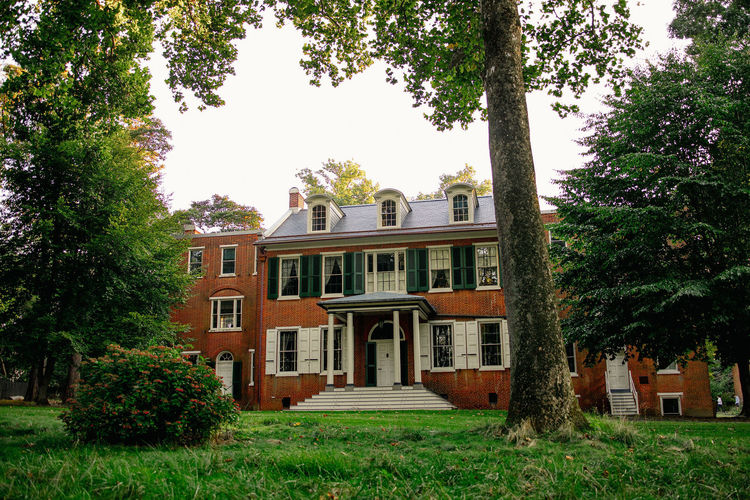 Mr. Buchanan was well pleased with his new home…

“I am now residing at this place, which is an agreeable country residence about a mile & an half from Lancaster.”

But the exterior appearance of the mansion had already been dramatically altered by second owner Thomas Potter. This grand, Federal style porch likely did not exist when the house was built. Evidence found under it suggests the front entrance had only a small stoop.

Additionally, there is evidence to suggest the wings may have been changed. An 1836 deed says they are two-story brick, while an 1845 deed says they are three stories. All the dormers on the house evidently came later too. Wheatland Director Pat Clarke tells us the unknown architect and builder paid careful attention to detail…

“Take a look at the front of the mansion with me. You notice that there are side-lights - the windows that flank the front door, and the flat lintels over the windows have bulls-eye corners. These are Federal features, classical Federal features on the mansion. The easiest and most noticeable feature from a Federal style house is also here at the mansion - the elliptical fan light over the paneled front door. Another feature on the porch are the symmetrically paired Doric columns.”

James Buchanan delivered a speech to his fellow Lancastrians from this porch in June 1856, when he learned he’d been nominated for president. Buchanan ran his presidential campaign from Wheatland, becoming the 15th President of the United States.

Now, if you’ll simply turn around, we’ll tell you about the front lawn.

In Mr. Buchanan’s day, a thick stand of trees stood along the road, obscuring the view of the lawn and the house. Director Pat Clark notes that in the 19th century, the front lawn was utilitarian, not decorative, as it is today…

“The tall meadow grass you see is a fescue that needs to be cut only twice a year. Two-foot paths cross in the center. Known as the ‘Old Sage of Wheatland,’ Buchanan was fond of strolling here, as well as throughout his farm. In his lifetime, a semi-circular drive way, lined with shade trees, extended from the two black posts you see by the street over to the right, up to where we are standing today, right here, and then back down to the street where you see the white posts.”

Just to the left of the white posts is a pond. It was one of Mr. Buchanan’s favorite retreats. Again, Pat Clarke…

“In Buchanan’s time, Wheatland boasted a fresh-water spring, which was home to several frogs. This peaceful scenery meant so much to Mr. Buchanan that he once told one of his doctor friends that if there was any truth to the story of reincarnation, he would want to return and inhabit the body of a frog.”

Paying homage to Buchanan, LancasterHistory maintains this pond as a peaceful respite for all who come to visit.

You can visit the pond if you wish. Either walk to the driveway on your left and turn right. You’ll find the pond at the base of the drive. Or, when your tour is complete, turn left at the Campus entrance, follow the sidewalk to the corner and turn left again. The pond is just inside the white posts.

Now, please follow the brick walkway on your right around the house to the back porch. If you wish, have a seat on one of the white benches.