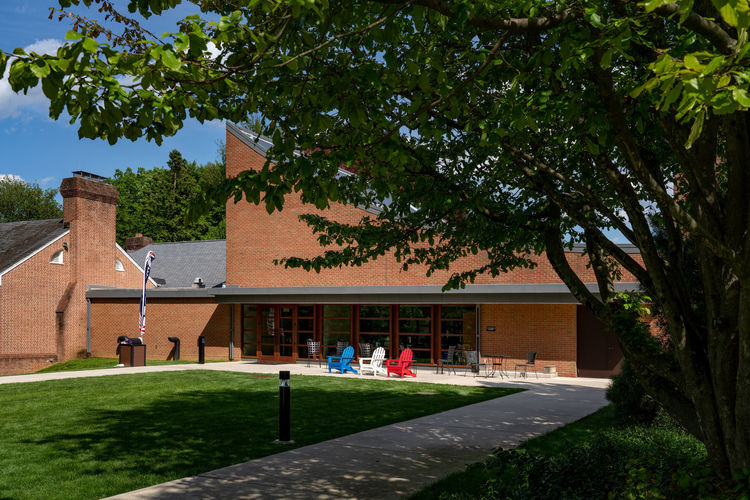 We’re glad you’re here. This is the first stop of your tour. We’ll be exploring various locations on our eleven-acre property, what we call the Campus of History. That includes stops in the Tanger Arboretum and at President James Buchanan’s Wheatland.

Right now, you’re standing at a pair of mill stones which were used in the 18th and 19th centuries to grind wheat and corn, among other things. Behind it is our award-winning museum and Research Center.

The original building is the more traditional looking structure further from you. Now known as the Willson-Kauffman Wing, it was built in the 1950s to house the Lancaster County Historical Society, now LancasterHistory. Today, it is home to our Research Center, which contains more than two million documents and books about the history of Lancaster County. The new, modern Stauffer Wing, closer to you, with a unique roof line, houses museum exhibitions, an auditorium and theater, the museum’s artifact collections, and Lancaster-History’s administrative offices. It’s where LancasterHistory President Doctor Tom Ryan has his desk…

“The building was designed by Centerbrook Architects. The curved roofline and large bays reflect the architectural legacy of our area’s many textile mills. The saw-tooth roof and north-facing windows allow ample natural light inside. The Stauffer Wing features sustainable designs, such as geothermal heating and cooling, and three large sets of solar panels on the roof. They generate more than double the energy needed to power the Wheatland mansion for an entire year.”

And the Research Center sits where Mr. Buchanan’s orchards were located.

Today’s Campus of History is half of the size of President James Buchanan’s Wheatland. In 1828, William Jenkins purchased this land and had the mansion and outbuildings constructed. In 1836, Wheatland shrank from 156 acres to 22 when Jenkins sold it to his son-in-law, Thomas Potter and an area farmer.

In December 1848, Buchanan purchased the property from third owner William Meredith for six-thousand-700-hundred-50 dollars. Mr. Meredith was headed to Washington to become the Treasury Secretary in the Zachary Taylor Administration. Mr. Buchanan was leaving Washington after successfully serving as Secretary of State in the James Polk administration.

Linger here, or anywhere on your tour, as long as you wish. When you are ready, stop number two is the front of the Wheatland mansion. Walk forward on this sidewalk; it changes to asphalt. Continue on to the junction. Then turn left and either use the stairs or the asphalt walkway to the left to reach the front.