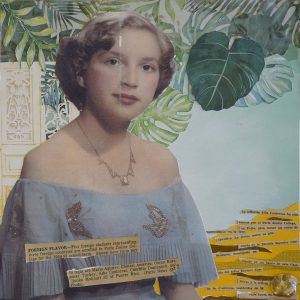 While she was born as an American citizen in Puerto Rico, she nevertheless experienced life as an immigrant after moving to Texas to attend college on a scholarship.

Included in the panel is the newspaper announcement, in Spanish, of her scholarship, and a photo caption from a Texas newspaper referring to her as one of a group of foreign students.

When she attended college, part of her scholarship required that she and another student visit local grade schools to present songs from Puerto Rico.

She was often excoticized when she presented these songs and so she and her friend began to sing funny lyrics in Spanish poking fun at the "gringos" which only the children who were Spanish speakers (in that area, mostly of Mexican descent) could understand.

The children would laugh throughout their performance, knowing that their teachers did not know what was being said.

I appreciate that she could provide some comical relief to others who felt isolated because their cultural background and language were not accepted.

I featured collaged images including a door, reminiscent of the colonial ironwork doors in San Juan, lush foliage, and golden colors evoking a shoreline.

The small amounts of gold reflect the gold that Christopher Columbus was seeking when he first arrived in Puerto Rico, and the start of the island's colonization and oppression under imperialism which has resulted in its current relationship with the United States and resulting economic hardships.

The gold shell and depiction of the shoreline refer to a poem my grandmother wrote at the end of her life in which she pictured herself holding a stone on the shore, turning it over in her hand, and examining the life she would have had if she had stayed on the island.

I chose to honor her in this panel for what she did to help other immigrants through her work as a social worker, the legacy she began (my mother, also born in Puerto Rico, works in social justice for immigrants), and for Puerto Rico and its people.

I did not know at the time of its creation that it would become so clear in the media and in Trump's administration that Puerto Ricans are not treated or viewed as Americans.

I expect many stories like Alba's are to come when so many are being forced from their home, su país, due to economic hardship, and now, lack of federal assistance to rebuild.