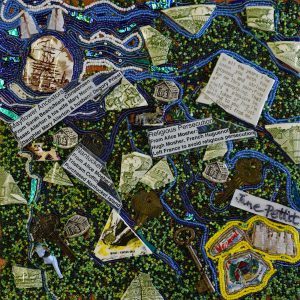 The four figures at the ship represent four ancestors from my Mom's side of the family who came over on the Mayflower: Isaac Allerton and his wife Mary Norris and their daughter Mary Allerton and her husband Degory Priest.

From my Dad's side, Tristram Coffin and a group of others in Somerset, MA bought Nantucket Island and built the whaling industry there.

The blue represents the family line spreading down through the years; the houses with a woman stand for making a home and the work the women did to make it possible, often behind the scenes; the keys represent ownership and a safe place; the broken key symbolizes my great grandad Alonso Munger losing his farm during the depression; the man with the wagon is him being allowed to take all he could fit in his wagon when he left, an unusual occurrence showing the respect he was given.

In his 80's, my dad made his own trek, taking several items from that wagon around the country in a u-haul to spread them among family members.

The livestock and farm images represent the many farmers in the family; the Kansas Gold image is a nod to where my folks grew up and met and the five people in Northfield, Vermont are my family, the Mungers.

The poem is acknowledging the hardships endured and the love extended, both now and then.