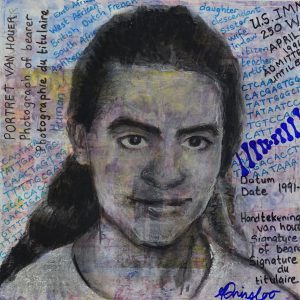 This panel depicts the 18 year old version of myself.

Young, naïve, enthusiastic for what life would bring.

I grew up in South Africa.

I was exposed to racial discrimination as a political philosophy (Apartheid) and way of life.

I was taught by my society that I was not fully acceptable; my mixed heritage was a shame for which I would suffer certain disadvantages.

Apartheid has since been replaced by Democracy in South Africa.

I have since come to celebrate who I am.

Had migration never occurred, our world would be a different place.

We would be trapped in xenophobia; lacked the sharing of ideas and resulting innovations; suffered in our isolation....

I thank my ancestors for their migration from different parts of West, East and South Africa, Britain, The Netherlands and Ashkenazim for my genetic make up.

Without them, I could not exist.