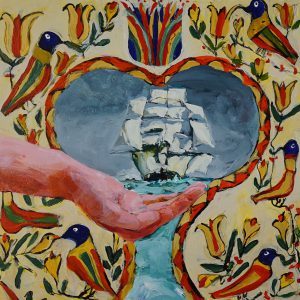 My panel honors my 5th great-grandfather Jacob Kauffman who was born in 1733 in the Palatinate district, a province of Bavaria in Germany.

Once a prosperous region, it was devastated by the Thirty Year’s War and then ravaged by Louis XIV who drove the Palatinates out, then burned their villages and plowed under their fields.

He created a system of oppression and intolerance that nearly wiped out the minority religions.

The war ended, but their troubles did not; intolerable religious conditions continued.

The outstretched hand in my panel represents William Penn, the Quaker pacifist, philosopher and land developer who in 1681 received a charter from the King of England to pay off a debt to Penn’s father, making Penn the sole proprietor of a large tract of land in North America which was named Pennsylvania.

Penn offered the oppressed German peasants a home where they could live without war and persecution in what was called “Penn’s Holy Experiment.”

Jacob was 13 when his family sailed to the New World on the ship Brotherhood from Rotterdam on November 3, 1750.

Jacob’s Amish parents died shortly after arrival, and Jacob grew up in the homes of friends and relatives and married into a Mennonite family.

The Mennonites were pacifists and lived peaceably with the Native Americans for many years.

Over thirty thousand German settlers began a new life in a new country and became known as the “Pennsylvania Dutch.”

The folk art in the panel represents the expression of the Old World toughened by the New.

The early settlers were mostly farmers, which meant they were also craftsmen, welders and carpenters.

Most of the objects they produced were utilitarian, but as they prospered the objects became more decorative with patterns and motifs that originated in the Old World and became personal reflections of the family.

Manuscripts were illustrated with quill pens, pencils and brushes on paper.

Birth, baptismal and wedding certificates and family registers, though not legal documents, are important examples of what is known as “fracture.”

The tulip, a common motif and widely grown in Pennsylvania, was very popular in Germany, brought to Europe from Asia Minor in the 16th century.

Birds such as eagles were also used, as well as peacocks, parrots, warblers and the “distelfink.”