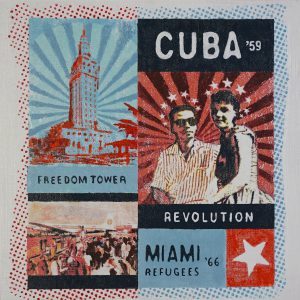 In 1959, the 26th of July Movement led by Fidel Castro ousted the authoritarian Cuban government of President Fulgencio Batista     and a young recently married couple decided to wait and see if the new Cuba would be a good place to start a family.

In the months that followed they realized, the revolution had not created a place for a family, they had to leave.

Seven years later, in December of 1966, they stepped off a plane in Miami and soon started the family they had postponed.

My panel tells the story of my parents journey from post revolutionary Cuba to America as political refugees.