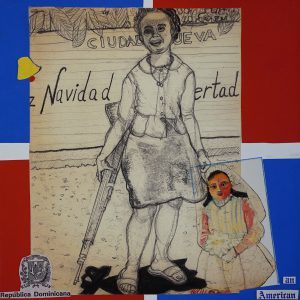 My panel shows a young woman "Tina La Bazookera" who was a revolutionary during the Dominican resistance when the US invaded the Dominican Republic in April 1965.

Tina was only sixteen, and while she was not trained as a soldier, she earned the nickname "la bazookera" because she was a skillful shooter.

Tina was one of the Women of April, the thousands of courageous women who fought the US invasion in 1965 in the struggle for self-determination for all Dominicans.

I was ten months old when the 42,000 marines ordered by LBJ arrived.

When Ciudad Nueva was heavily shelled by the Intrepid, parked just off the malecón, we fled and became refugees then immigrated to New York City along with thousands of Dominicans.

I claim these courageous women as ancestors.

Tina is shown holding a gun in one hand and a picture of me in another.

This small painting commemorates my first communion, one of my earliest memories in America.

Written on the wall behind her is "(Feli)z Navidad" to signify light and rebirth, "ciudad nueva" signifying the new community that Dominicans formed across the ocean highway in Nueva York, and "libertad" the most important human right for all peoples.