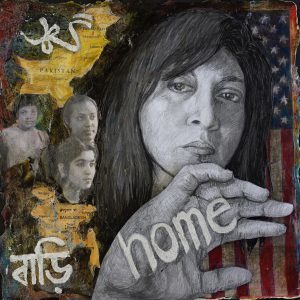 My panel is called "home."

I grew up in Pakistan until I was eleven years old.

What made us leave Pakistan was a war.

My father was working for the Pakistani government at the time as the director of tourism, but he was from East Pakistan and suspected as soon as tensions started building in East Pakistan.

I remember being terrified of what war meant.

My only idea about it was what I saw in movies.

In my mind I pictured tanks coming down our streets and bombs being dropped.

I remember my mom and dad anxiously discussing late one night what would be the best thing to do, as they knew that they would be coming to put my father under house arrest.

My mother was a well-known broadcaster and award-winning novelist so she was allowed to leave the country with her kids, telling them we were going on vacation to London.

We all knew we were never coming back.

I drew a detailed layout of the house we lived in so I wouldn’t forget my home.

A few days after we left my father was under house arrest and not allowed to communicate with us for almost a year.

War had broken out between West Pakistan and East Pakistan.

East Pakistan wanted their liberation from West Pakistan and Bangladesh was created.

My mother, my two siblings and I lived with friends and family, waiting and praying for my father’s safety.

Finally my father escaped and left everything we had behind with whatever money he could bring with him and met us in London.

We would end up living another year in London while waiting for our green cards to be processed.

My aunt and uncle who have been in United States since the 50s and were American citizens were sponsoring us.

I grew up speaking three languages, and English was one of them, so at least I didn’t have that hurdle.

I had been going to all girls’ school until I came to America, and then I was thrown into the American school system.

Needless to say I had major culture shock.

I was just starting high school, and I absolutely hated it.

I have been here the longest, so I think of America as my home until someone I don’t know is introduced to me, and the first thing they ask me is “So where are you from?”

I sometimes feel no matter how long I live here there will always be people who won’t accept me as an American because I look different.

I am glad it’s not very often that I encounter that question from a stranger, and I am thankful that I am surrounded by loving friends and family who help me believe that this is my "home,."