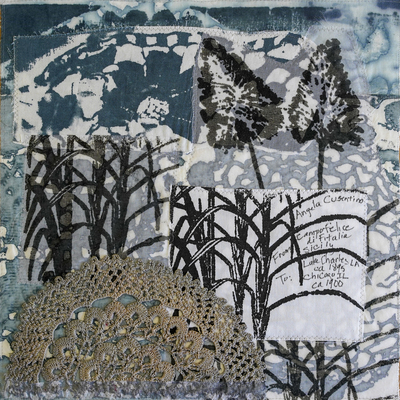 My panel comprises a fabric collage with images of sugar cane plants and crochet work.

She was part of a wave of Sicilian laborers who were brought to Lake Charles,Louisiana as indentured workers on the sugar cane plantations in the late 19th century.

She was not much older than 18 when she made this journey.

She met my grandfather there : when the required work was completed, they moved to Chicago (circa 1900) to a community populated by other Sicilian immigrants.

Little English was spoken and many remained illiterate.

Still, their circumstances were vastly improved over their former life in Sicily.

They eventually owned a tenement building including a small grocery store, where they and some of their 10 children worked.

They also acquired a cherry farm in Michigan during the Depression in order to provide work for their grown children.

In addition to the family business, she did piecework for clothing factories, and was skilled at crochet work, done mostly for her home and her daughters’ trousseaus.

She never left the neighborhood, but many of the children moved on and became successful with their own small businesses and other occupations.