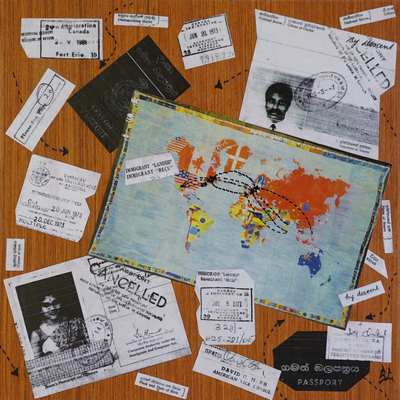 Newly married, my husband and I moved to the US when he started working at Los Alamos National Laboratory in New Mexico.

Our journey, and our meeting before that, never would have happened, however, if it weren't for our parents taking bigger leaps across oceans to emigrate to Canada.

Starting with my parents' journeys, I thought about the world as they might have seen it, and the representation of it, as found in various world maps for 1971, the year my father emigrated from Sri Lanka (Ceylon) to Canada.

My parents were introduced over Christmas holidays and were married in a matter of weeks, in January 1973, the year my mother emigrated.

I've incorporated bits of cancelled passports pages - terms such as "non-immigrant visa," "permitted to land," amongst others.

I could have lined these up neatly, but passport stamps appear to carry the transitory energy of airports, it seems, so I used that energy in the lay-out.

There are dotted lines, marking the routes of both my parents from Sri Lanka, and my in-laws, from the Philippines, and India, as well as the routes taken by my husband and me, to Maryland, by way of New Mexico, and New Jersey.

One could almost ascribe personalities to passport stamps and those doing the stamping.

Amidst all these hastily stamped, imperfect "impressions" made in a person's passport, isn't it interesting how suddenly, a stranger in a strange land becomes a "returning resident" - a different life, in a new world?