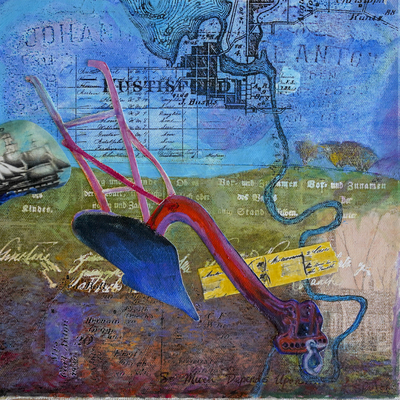 They joined other Germans in tiny Hustisford, Wisconsin, where schools, businesses, and churches used German for decades to come.

Their church provided services in German until the 1970s.

They had 10 children and farmed land that was rich, inexpensive, and plentiful, its native American inhabitants recently driven off.

I imagine their first plow, and then think of William Carlos Williams’s poem "The Red Wheelbarrow" (1923).

So much has depended on that plow, and on their hard work, their risk-taking, and their luck.

My panel shows the ship’s manifest, the ship itself, the 1880 Wisconsin census, parts of the 1890 Hustisford plat, and my great great grandparents’ gravestones.

What might these strangers have passed down that I don’t realize?

What can I find out about them by looking inward?

For example did they have the dry sense of humor on my mother’s side, or perhaps my feeling that a city must be near a lake or river?