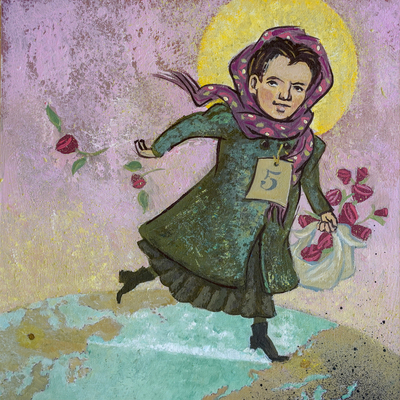 In 1905, when her wedding plans were quashed by her stepfather’s refusal to provide a dowry, twenty-two year old Yeva borrowed $25 for a one-way ticket to America.

Years later, she told how immigration officials tagged her “like a piece of luggage” and put her on a train to join relatives in Clearfield County, Pennsylvania.

In a dark twist of fate, Yeva had traveled from a poor village in the Carpathians to another impoverished region in the mountains of Appalachia.

Out of funds, finding no jobs for women in the backwoods coal town, Yeva hastily agreed to marry Wasyl Bunga, a miner and traditional musician who had fled her native Vetlyna a decade earlier to avoid conscription into the Austro-Hungarian army.

The couple moved into a two room company house with no electricity or indoor plumbing.

Yeva persisted through decades of hardship.

To feed and clothe their large family, she sewed clothing from flour sacks, tended a garden, and kept a cow and chickens.

At night she borrowed the older children’s school books and learned to read and write.

Her sons and daughters pointed out this was unnecessary, since her husband had become a citizen before their marriage.

My acrylic painting of a young immigrant leaping across the Atlantic draws inspiration from a 1920 family portrait, Eastern European folk art, Orthodox Christian icons, and the Ellis Island photos of Lewis Hine.

The spattering of black in the lower right corner evokes coal dust, while the dozen roses allude to Yeva’s 12 children.

In 1905, the year of my great-grandmother’s crossing, Pablo Picasso painted his Rose Period canvas "Boy With a Pipe".

I echoed his warm pink backgrounds as a tribute to Yeva and other immigrant women’s indomitable spirit and hopes of a fresh beginning.