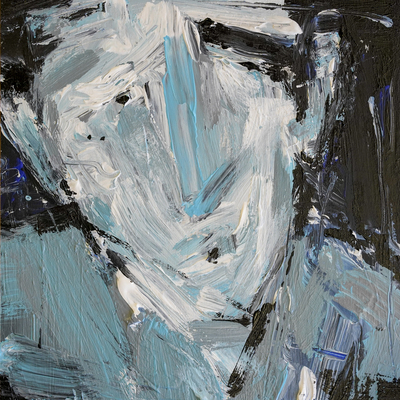 In 1875 at the age of 20, Oluf Oleson Lindseth, my maternal great, great grandfather, immigrated to Minnesota from Norway.

In 1895, taking advantage of the Homestead Act which promised fertile, flat land, he and his wife became the earliest pioneers in the Farmington area of Montana.

There he ranched, and worked as a stonemason and plasterer.

Oluf fathered 14 children before his death at 73 in 1928 at Farmington.

One of his sons, Juel, was my favorite grandfather.

Juel married the teacher at the one room schoolhouse near the Lindseth ranch in Montana and became a building contractor in Portland, Oregon.

While Oluf's features are unknown to me, I imagine he resembled his children and grandchildren - mostly blue-eyed blondes.

My painting seeks to capture the spirit of independence, resourcefulness, tenacity and daring -- traits of a strong pioneer temperament.