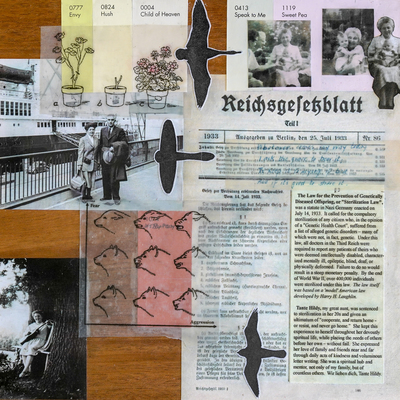 My great aunt, Hildegard Stiebeiner (Tante Hildy), was born in Germany in 1911 and immigrated to the US in 1952.

In her 20s, she became one of approximately 400,000 Germans to fall victim to the Third Reich’s Sterilization Law.

Pure resilience allowed her to keep her family’s business and farm operating while not losing hope that her missing fiancé, George, would return from the Russian front.

Hildy was instrumental in the emotional and diplomatic challenge of vouching for her townspeople while they searched for safe harbor, as most towns were already full of refugees.

500 miles later they resettled, together.

The connection between many of these families is still alive today.

In the US, Hildy and George worked as a housekeeper and gardener team at large estates, sometimes under harsh circumstances.

Both were impeccable at their work.

Many believed Hildy had help “from above”.

Wherever she lived, she thrived, building a family around her - quietly, through her kindness, generosity and trust.