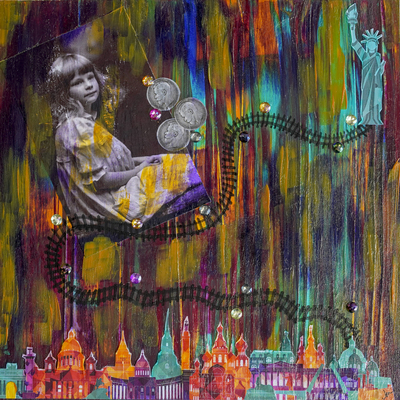 My grandmother Noel was born in 1909.

Her father Herman was an engineer who'd been born and raised in Estonia, on an estate called Sipp, about 50 miles south of Talinn (then Reval) when Estonia was part of Imperial Russia.

In 1914, they moved to Petrograd as he was a senior engineer helping develop a railway north (to Archangel and Murmansk).

By mid 1917, it was obvious that unrest in the city (Bolsheviks and others) was increasing, making things unsafe.

The Czar had already abdicated but Lenin had not yet arrived. (Petrograd was then—and long had been—the capital city.)

So, Herman bought tickets for the family on the Trans-Siberian railway to escape—as they couldn't go west through war-torn Europe.

Herman, his wife Louise, daughters Mary and Noel, and Isabelle (Louise's sister) made up the party.

They packed and wore what they could, sewing their jewelry into the hems of their clothes.

The trip took at least a week and was filled with adventures.

They eventually reached Vladivostok and from there a hop to Japan.

They took a small steamer across the Pacific to San Francisco, and then a train across the US to New York.